A lot has been written in the Social Media sphere in regard to the March in March, everything from 'people power' pieces to anger about how it was ignored by the Mainstream Media.  Fairfax Writer Jacqueline Maley rather snippily said in her piece "The lack of coverage of March in March probably had something to do with the fact that, like so much left-wing protest, it was unfocused".  I can see where she could come to this 'unfocussed' conclusion and comments similar to that were bandied around by Journalists all over social media. Though this lack of interest compared to the 'Convoy' March is for another day to discuss.

Many were Anti-Abbott, though not all, and the limited media focus was on the plethora of anti-Abbott signs like 'Resign Dickhead', though, there were so many more that could could have been noticed too.

and... I didn't even go down the whole page of the #MarchinMarch Google images search

Now, this is what I loved about March in March, the very thing the journo’s don’t like, how it was ‘unfocused’.

In my day job I work with many non profits, charity & advocacy groups and the fact is, each passionate advocate feels that their ‘cause’ is more important than the next.  I ‘get that’, I mean without passionate people a lot of worthy initiatives to help communities would never get off the ground.  What I dislike, which you don’t normally see in public, though do on Social Media, is the childish, “My Cause is more important than yours” rubbish.

Advocating for a cause, in my experience, comes from many different sparks.  I am sure smarter academics like Sociologist Nick Osbaldiston (@NickOsbaldiston) will have valid hypothesis as to how we come to support what we do, though in my amateur view, it seems to be that most fall into three categories:  Experience of an issue, Ego & Self Worth & lastly, which I know will not make popular, Peer Pressure or it is just Trendy.

Experience of an Issue:
This I totally understand.  I myself am passionate about the likes of Mental Health and access to it, as I have a family member who suffers from a Mental Health issue.  I also heavily support our local Hospice after the experience of my father dying in a Hospital and the awful trauma that caused.  Obviously working in IT and running a small business supporting equitable, fast, stable Broadband is a no brainer for me.  Last but not least, having so many friends that have not been able to enjoy the same education as myself, (and... I am not talking further than High School) something that has been highlighted increasingly on Twitter where lack of comprehension is seen on a daily basis, leading to all sorts of issues, well nationwide access to equitable high standards of education also matters to me.

Ego & Self Worth:
Is a double edged thing in my experience.  I have known so many volunteers that will toil away for decades, quietly expanding their energies, with very little thanks.  Those people are just hidden gems in our communities, the people that rarely receive PR & Awards, nor do they wish them.  They are satisfied in themselves that the work they do is ‘good’ and that is enough for them.  These people I am just in awe of and thankful that I have been lucky enough to know many of them.  The other side of this coin are the Ego’s.  Regardless of how much they may protest, the base reason they may support a cause is to big note themselves, “Look at me, how wonderful am I being such a charitable person...” types.  I am sure you have all met them before, worse, you can’t even call BS on them as they are actually helping in their own way, not to mention how awful and uncharitable you would look to diss their efforts with a suggestion that they were not ‘pure of heart’, even though for me, my gut tells me their efforts are predominantly self-serving.

Peer Pressure & Trends:
This is another double edged one in my opinion.  Often it can be a good thing, a particular cause starts trending, so many who have never considered an issue actually become aware of it, look into, then may see the injustice of a situation & jump on board.  There is nothing wrong with that all.  What gets up my nose is when something who is ‘popular’ starts advocating a cause, it gets pushed by media, normally singular in it’s approach, and we end up with everyone jumping on the bandwagon.  What is sad in this case is that often the punters who follow along with the hyperbole do actually have passionate natures that I personally wish could have been focussed on more worthy issues that assist a larger percentage of the population, or at least if they were going to support it, did it for the 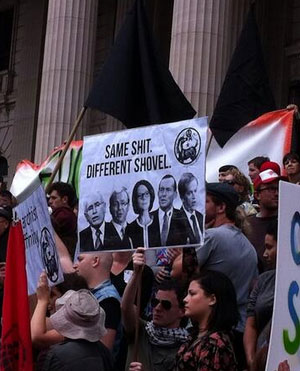 Having said all that, this is where I was thrilled by March in March, not only did sleepy regional areas get involved, a massive feat in itself when any form of protest is normally set in capital cities, but the vast number of causes being advocated, all together, in one forum, peacefully.  In my experience, advocates don’t normally like to share a stage, they want their particular cause to be front & centre.

I will leave it to others to dissect the rights & wrongs of media attention on March on March, though I personally lament the fact that all the media saw was ‘lack of focus’.  For me, someone who is teasingly called a ‘charity chick’ in my day job, seeing all those polar opposite causes & advocates coming together to protest in unison really gave me pause.  More importantly it gave me hope that people can be more supportive of each other, that a cause can be promoted passionately without unnecessary one-upmanship which is harmful.  I wish the media had seen that aspect?  I wish they didn't feel the need to focus on just one issue and if that one issue was not right in front of your face then it was just pass to hard and easy to write off as a rag tag rabble.  I wish the media had looked a bit closer and given just a little bit of attention to what people cared about & the fact that they got off their bums to join together with unlikely protest-mates to highlight it. So many causes could have seriously benefited from that media exposure?

If you went to March in March, what particular cause, issue, concern were you predominantly there for?